We continued our day trip through the Hood River Valley and into Mount Hood National Forest to Timberline Lodge.


Mount Hood is a composite volcano with an estimated height of 11,249 feet making it the highest point in Oregon and the fourth highest in the Cascade Range.

Sitting at about 6,000 feet up the mountain is Timberline Lodge.  Timberline was declared a National Historic Landmark in 1977 and is one of Oregon’s most popular tourist attractions, drawing nearly two million visitors every year. Considered an architectural wonder, it’s still being used for its original intent—a magnificent ski lodge and mountain retreat for all to enjoy.  In fact, people were skiing Mount Hood in June when we made our visit. 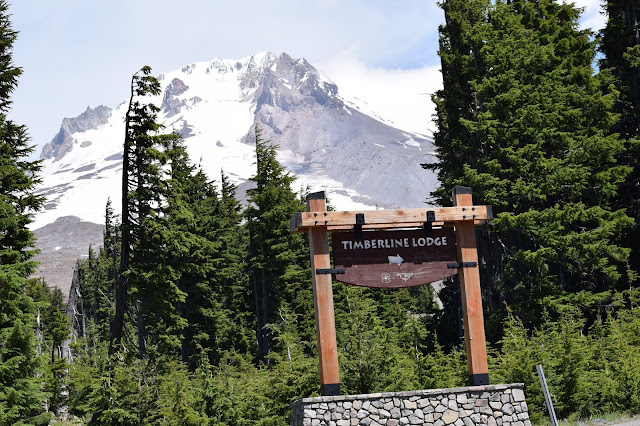 Of course our visit to Timberline would not be complete without a refreshment in the Ram's Head Bar located on the second floor circular balcony.....just like Cheryl Strayed did in the book Wild.  Strayed took a break at Timberline before hitting the Pacific Crest Trail which coincides with the Timberline Trail on the west side of Mount Hood. (Did we mention TK's obsession with this book?)


If the outside of the lodge looks familiar it may be that you recognize it from the 1980 movie – The Shining.  The director used aerial shots of Timberline Lodge as part of its opening scene, and exterior footage for some establishing shots of the fictional Overlook Hotel throughout the movie.

The movie director was asked not to depict room #217 (featured in the book) in The Shining, because future guests at the Lodge might be afraid to stay there. So a nonexistent room, #237, was substituted in the film. Curiously and somewhat ironically, room #217 is requested more often than any other room at Timberline.

Starting back down the mountain we stopped at Mount Hood Adventure Park at Skibowl to ride the Pacific Northwest’s only ½ Mile Dual Alpine Slide. We started with a leisurely trip up the mountain on the Scenic Sky Chairs, and then prepared for a roller coaster ride down the mountain. We dropped 350 feet over the half mile ride with average speeds around 20 MPH.  TK refused to go any faster even though this was "her idea" and G-man first alpine slide ride.