Since we were just a few miles from the Pacific Coast we decided to leave the Hoh Rainforest and spend a few minutes at Ruby Beach, Washington.  We were not disappointed with our decision.  The view from the look-out just below the parking lot was breath taking as was the beach once we got a closer look. 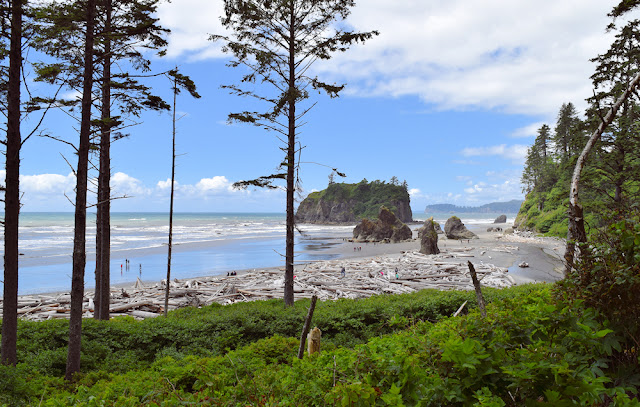 Famous for the reddish sand that occasionally gathers and large, rock islands known as sea stacks, Ruby Beach is one of the most well-known and highly anticipated beaches to visit along the Olympic coastline. This beach is the northernmost of the southern beaches in the coastal section of Olympic National Park. It is located on Highway 101, in Jefferson County, 27 miles south of the town of Forks. 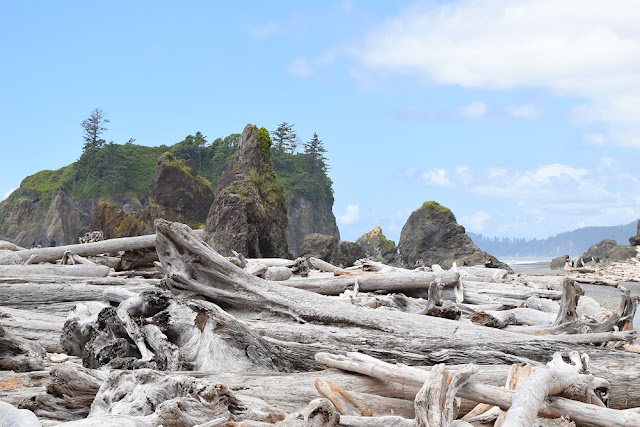 Like virtually all beaches on the northern coast, Ruby Beach has a tremendous amount of driftwood which we had to climb over to walk the beach and get closer to the sea stacks. 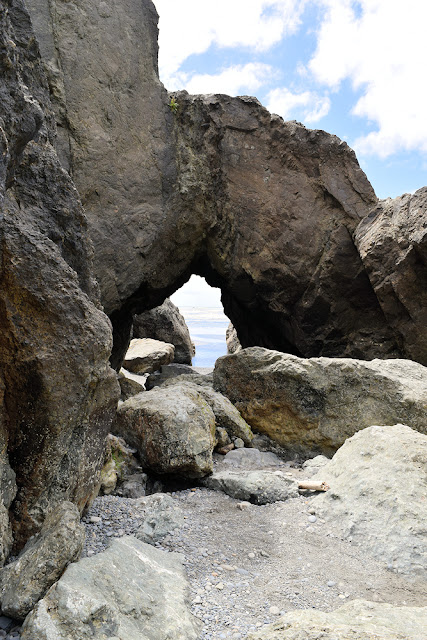 Destruction Island was used as an anchorage by Spanish ships in 1775. A crew of seven men was sent to the mainland to procure supplies of wood and water, but was massacred by the local Indians, leading naval lieutenant Juan Francisco de la Bodega y Quadra to name it the Isla de Dolores (the Island of Sorrows). Twelve years later, Captain Charles William Barkley, an independent English fur trader, arrived in the ship Imperial Eagle, and sent a party ashore from the island to a similar fate. He named the river where the second massacre took place the Destruction River. Captain George Vancouver later transferred the name to the Isla de Dolores when the river was given its Indian name, the Hoh River.

Three shipwrecks occurred at the island in 1889: Cassanora Adams, Port Gordon, and Wide West. The 94 foot Destruction Island Lighthouse was built on Destruction Island in 1888-91. A US Coast Guard detachment operated the lighthouse from 1939 to the early 1970s. The light was automated in 1968, before it was shut off for good in April 2008. The island itself is accessible only by boat.Jump up
Email ThisBlogThis!Share to TwitterShare to FacebookShare to Pinterest
Location: Ruby Beach, Washington 98331, USA
Newer Post Older Post Home