Traveling south on along the Oregon Coast we stopped for lunch at Leroy's Blue Whale Family Restaurant in Yachats, Oregon.  Here we shared a delicious "Carnival Burger" topped with grilled onions and a mouth watering piece of coconut cream pie!  We really enjoyed the food and service at this little diner right off the Pacific Coast Highway.

With our bellies full, we continued south on Highway 101 to a destination, made up of four natural areas, we were really looking forward to seeing......Cape Perpetua, Devil's Churn, Thor's Well and Spouting Horn.


Cape Perpetua is a large forested headland on the central Oregon Coast which projects into the Pacific Ocean. It’s part of the Siuslaw National Forest and it is a great place to experience towering trees looming through a coastal fog, frothy surf crashing upon jagged shores, and majestic headlands offering clear views for miles.

Cape Perpetua is located 2 miles from Yachats and has a visitor center (Cape Perpetua Visitor Center) that offers a phenomenal view of the ocean from inside and from the deck.

From the Cape Perpetua Visitor Center, a short hike down to Devils Churn, reveals an impressive chasm where an angry sea splashes and whirls white froth along the rocky edge. 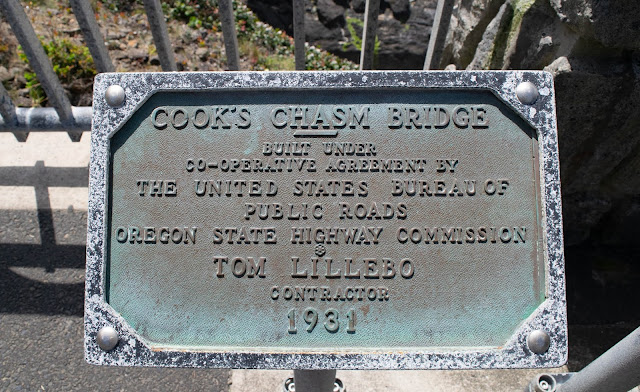 On the edge of Cape Perpetua, sits a gaping, seemingly bottomless sinkhole known as Thor’s Well. This natural wonder is not actually bottomless; it is, however, very dangerous!

Also known as the drainpipe of the Pacific, the well is actually a hole in the rock that only appears to drain water from the ocean. According to some researchers, the Well probably started out as a sea cave dug out by the waves, before the roof eventually collapsed and created openings at the bottom and top through which the ocean sprays. The huge hole is likely only around 20 feet deep, but it still manages to produce amazing sights. (Not for the faint of heart, however, especially when you're watching a foolish couple walk to the edge for a selfie!)


Just south of Thor's Well is another, but smaller chasm, and the location of Spouting Horn.  From the view point one can hear the sound of the water being sucked up from below the horn and then sprayed out to be released into the ocean breeze.

Our next stop......the Heceta Head Lighthouse!