This adventure was the highlight of our whole Washington State trip!
After visiting the North Cascade National Park we drove over to Anacortes, Washington, and claimed the Ship Harbor Inn as our home base for the next few days.  (We will post a separate blog post all about Anacortes, Washington, soon.)  One of the reasons we stayed at this particular hotel was because it was within walking distance of the ferry terminal to get to Friday Harbor at San Juan Island, Washington. 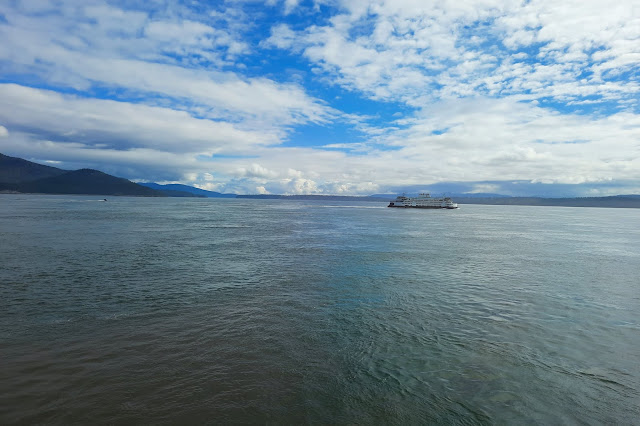 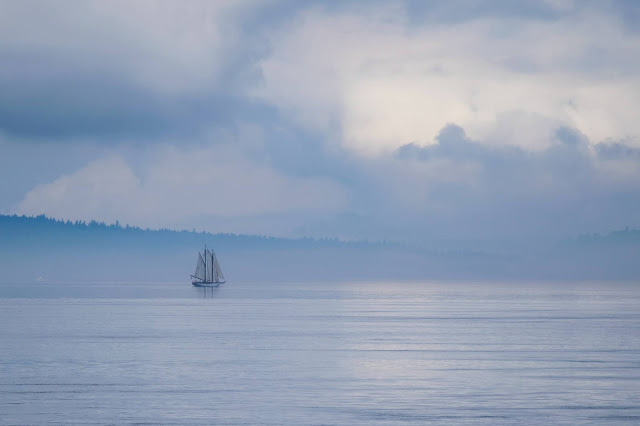 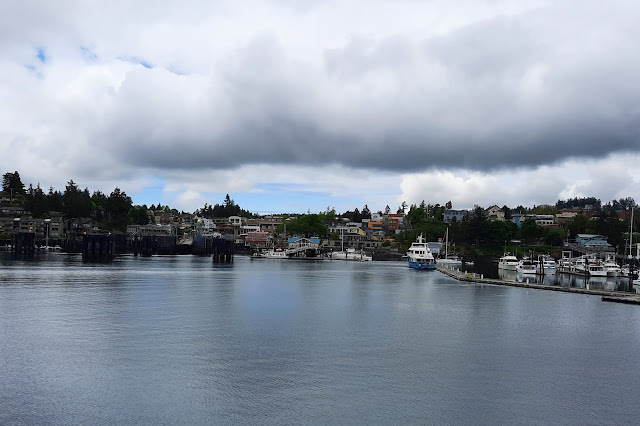 We woke early to take the first ferry over to Friday Harbor.  After almost an hour long, peaceful, ferry ride, with spectacular views of the Puget Sound, we docked at Friday Harbor.
Friday Harbor, Washington, is a charming, historic, walkable seaport just steps from the ferry landing.  It has small, friendly shops and restaurants, and a refreshing absence of fast-food chains. There's no need for a car to see Friday Harbor. Everything is within walking distance of the ferry landing, and it is easy to get around, including shuttle buses and a trolley to take you around the island, as well as bike, three-wheeled Scootcoupe, and moped rentals.
We had reserved a Scootcoupe rental from Susie's Mopeds before we left for Washington, so after we exited the ferry we walked over to Susie's to pick up our rental. Susie's Mopeds provided us with a tour map of the Island so we hit the main road to see the sights! 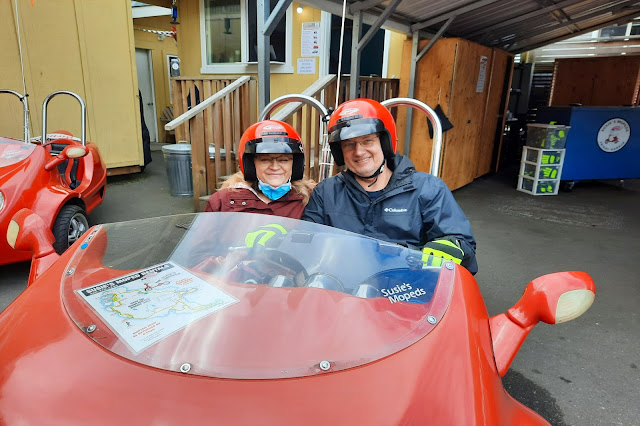 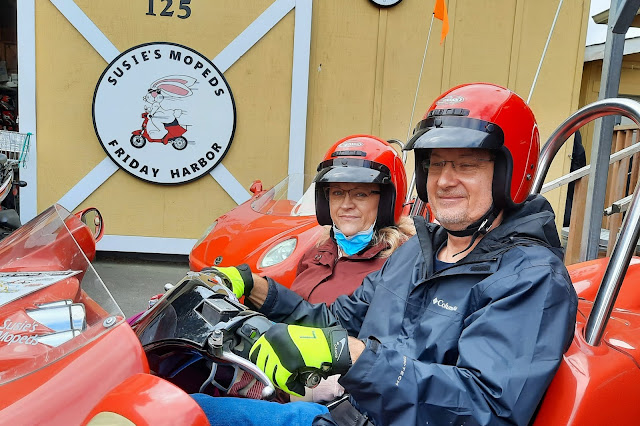 Our first stop was Roche Harbor! Roche Harbor is a historic seaside resort located on San Juan Island, Washington. Steeped in rich history and surrounded by lush gardens, the village is a short drive from nearby Friday Harbor. 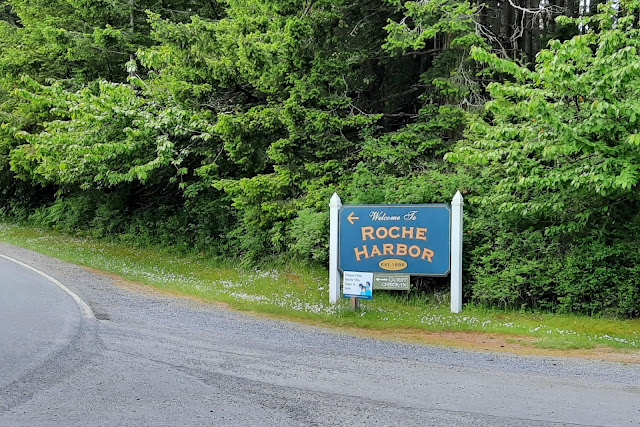 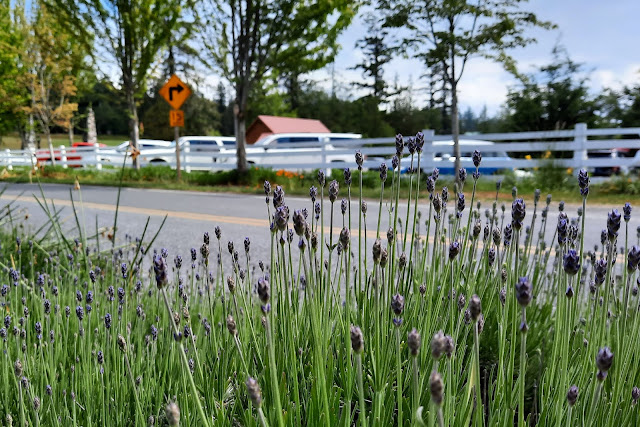 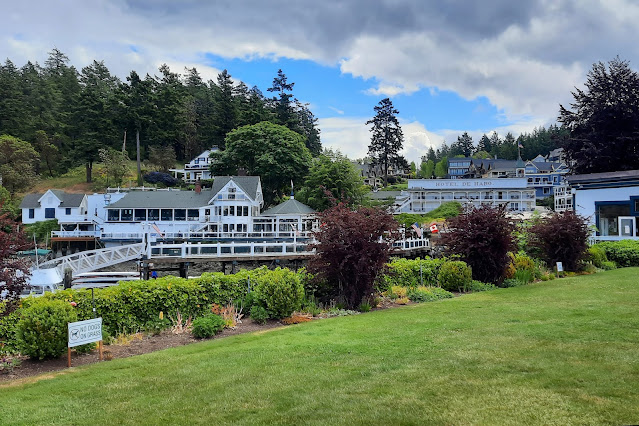 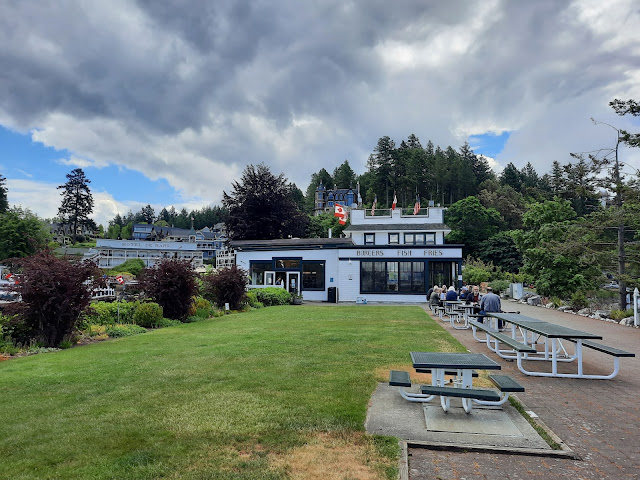 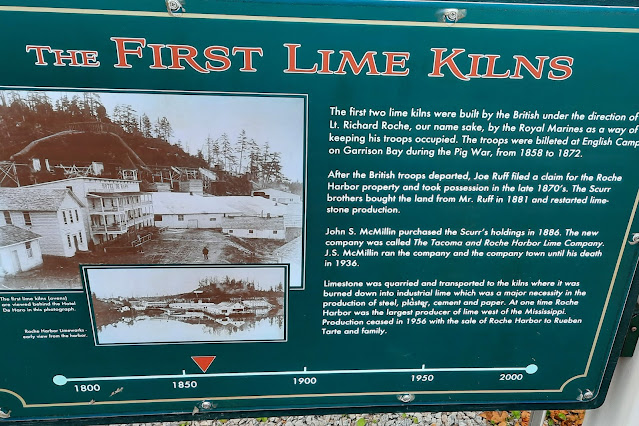 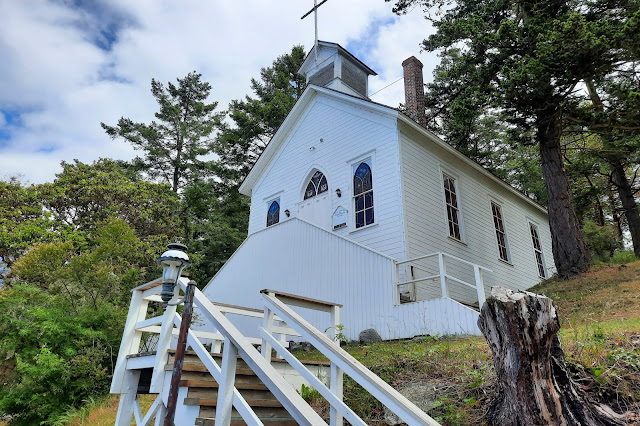 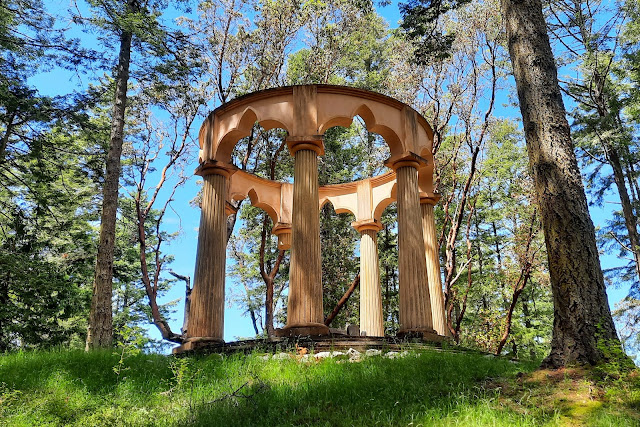 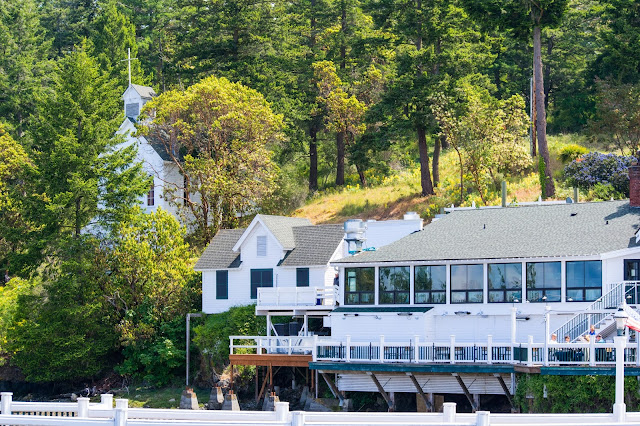 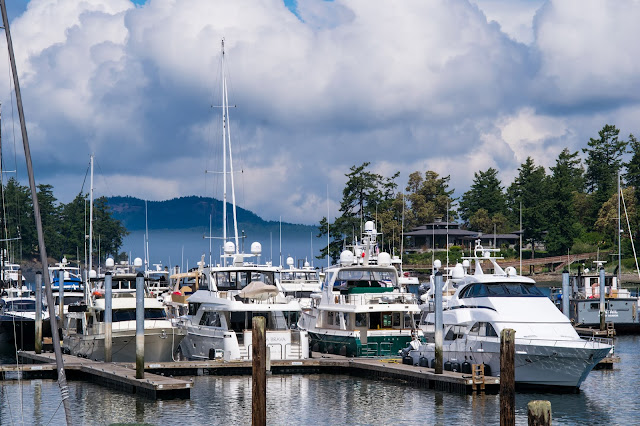 After a great lunch at Roche Harbor we hopped back into the Scootcoupe and made our way to the English Camp. San Juan Island is well known for splendid vistas, saltwater shore, quiet woodlands, orca whales and one of the last remaining native prairies in the Puget Sound/Northern Straits region. But it was also here in 1859 that the United States and Great Britain nearly went to war over possession of the island, the crisis ignited by the death of a pig. The Royal Marine Camp, as it was referred to in the late 1800s, consisted of 27 structures, a formal garden and ample room on the parade ground. The ship, the HMS Boxer, a steam gunboat with shallow enough draft to negotiate the waters of Garrison Bay, called on a regular basis from Victoria, BC,  bringing mail, food and other stores along with passengers going both ways.  After a quick tour we jumped back in "the coupe" and drove over to the Lime Kiln Lighthouse. 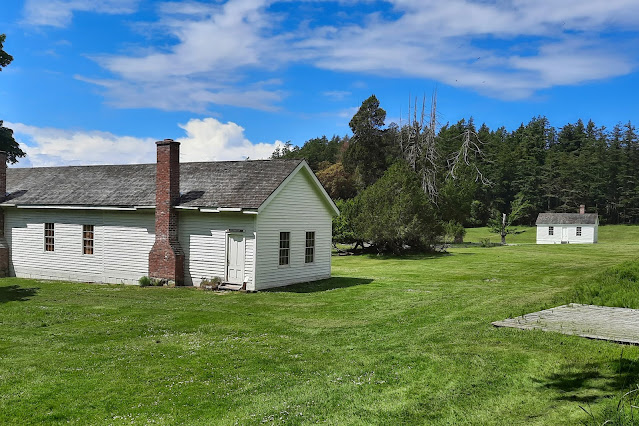 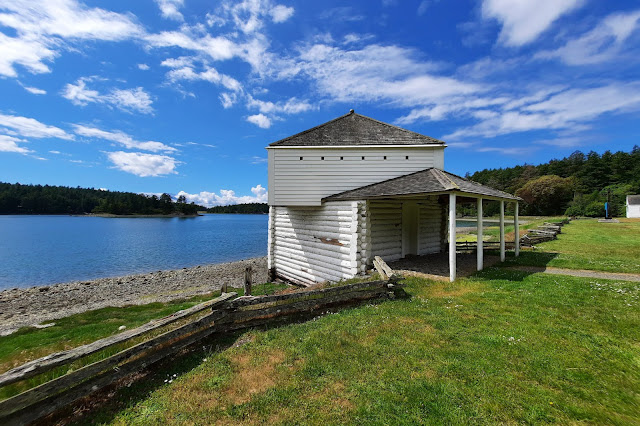 Set on a rocky bluff at the west end of San Juan Island, Lime Kiln Point is considered one of the best whale-watching spots on earth. The pods, which also include humpback and minke whales, pass through the area every May through September, with peak times depending on salmon runs. Visitors can see the action from a 1919-vintage lighthouse or from a nearby sea cliff. Disappointed, we did not spot a whale from this point as we had hoped!  Back in the Scoopecoupe we made our way across the island to the American Camp. 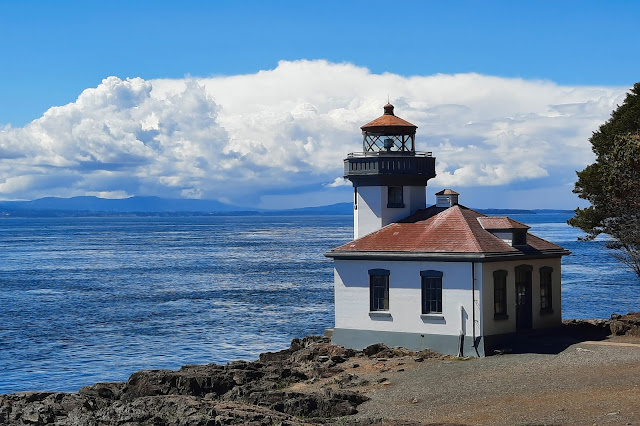 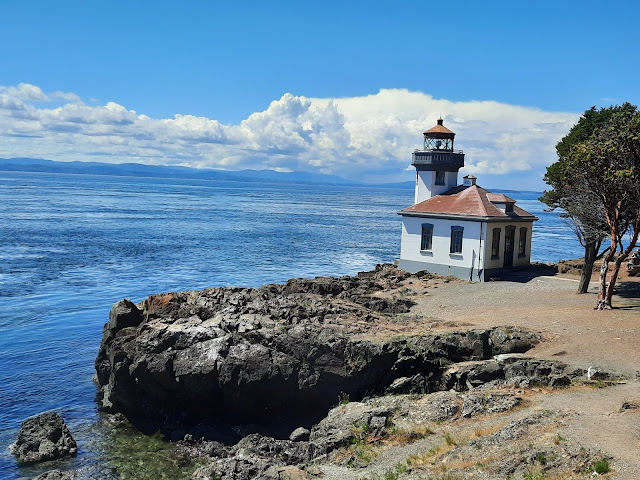 Camp San Juan Island, today known as American Camp, was occupied by the U.S. Army from July 1859 through November 1874. The only structures that remain today are the two officers' quarters.  We found the American Camp to be under construction as the island is making renovations that include hiking trails and restroom facilities. 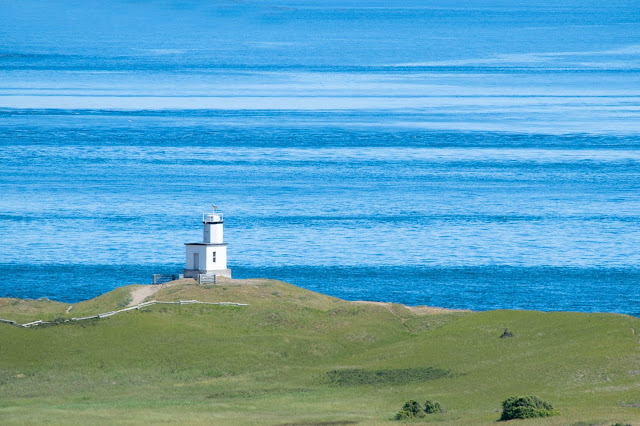 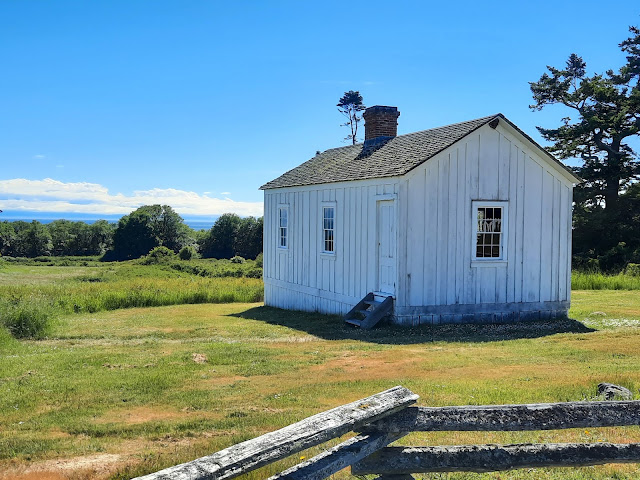 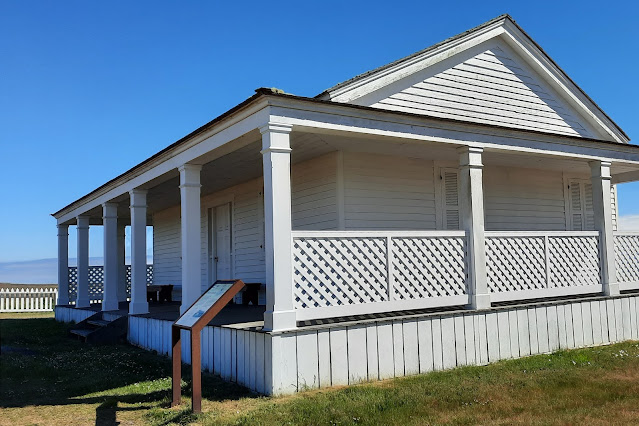 After a wonderful day exploring Friday Harbor and the San Juan Island it was time to make our way back to Susie's Mopeds to turn in our Scoopecoupe rental.  Fortunately, the San Juan Island Brewing Company, was within walking distance from Susie's.  We headed over there for some adult refreshments before hoping aboard the next ferry and returning to Anacortes, Washington.
Our next stop on our world wind tour of the beautiful state of Washington, Whidbey Island!
Email ThisBlogThis!Share to TwitterShare to FacebookShare to Pinterest
Location: Friday Harbor, WA 98250, USA
Newer Post Older Post Home